Islamists stoke resentment of the West—and anger over the long decline of Muslim influence—to serve their own violent ends.

The attacks on U.S. diplomatic missions this week—beginning in Egypt and Libya, and moving to Yemen and other Muslim countries—came under cover of riots against an obscure online video insulting Islam and the Prophet Muhammad. But the mob violence and assaults should be seen for what they really are: an effort by Islamists to garner support and mobilize their base by exacerbating anti-Western sentiments.

When Secretary of State Hillary Clinton tried to calm Muslims Thursday by denouncing the video, she was unwittingly playing along with the ruse the radicals set up. The United States would have been better off focusing on the only outrage that was of legitimate interest to the American government: the lack of respect—shown by a complaisant Egyptian government and other Islamists—for U.S. diplomatic missions.

Protests orchestrated on the pretext of slights and offenses against Islam have been part of Islamist strategy for decades. Iran’s ayatollahs built an entire revolution around anti-Americanism. While the Iranian revolution was underway in 1979, Pakistan’s Islamists whipped up crowds by spreading rumors that the Americans had forcibly occupied Islam’s most sacred site, the Ka’aba or the Grand Mosque in Mecca, Saudi Arabia. Pakistani protesters burned the U.S. Embassy in Islamabad.

Violent demonstrations in many parts of the Muslim world after the 1989 fatwa—or religious condemnation—of a novel by Salman Rushdie, or after the Danish daily Jyllands-Posten published cartoons of the Prophet Muhammad in 2005, also did not represent spontaneous outrage. In each case, the insult to Islam or its prophet was first publicized by Islamists themselves so they could use it as justification for planned violence.

Once mourning over the death of the U.S. ambassador to Libya and others subsides, we will hear familiar arguments in the West. Some will rightly say that Islamist sensibilities cannot and should not lead to self-censorship here. Others will point out that freedom of expression should not be equated with a freedom to offend. They will say: Just as a non-Jew, out of respect for other religious beliefs, does not exercise his freedom to desecrate a Torah scroll, similar respect should be extended to Muslims and what they deem sacred. 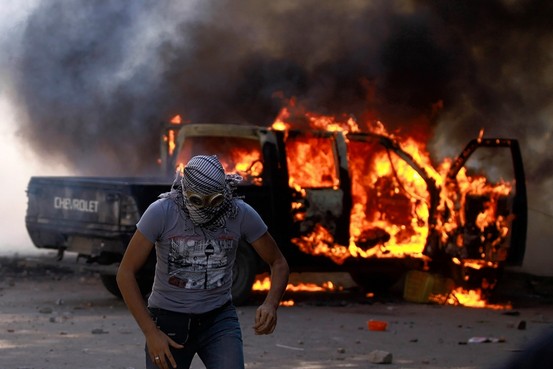 But this debate, as thoughtful as it may be, is a distraction from what is really going on. It ignores the political intent of Islamists for whom every perceived affront to Islam is an opportunity to exploit a wedge issue for their own empowerment.

As for affronts, the Western mainstream is, by and large, quite respectful toward Muslims, millions of whom have adopted Europe and North America as their home and enjoy all the freedoms the West has to offer, including the freedom to worship. Insignificant or unnoticed videos and publications would have no impact on anyone, anywhere, if the Islamists did not choose to publicize them for radical effect.

And insults, real or hyped, are not the problem. At the heart of Muslim street violence is the frustration of the world’s Muslims over their steady decline for three centuries, a decline that has coincided with the rise and spread of the West’s military, economic and intellectual prowess.

During the 800 years of Muslim ascendancy beginning in the eighth century—in Southern Europe, North Africa and much of Western Asia—Muslims did not riot to protest non-Muslim insults against Islam or its prophet. There is no historic record of random attacks against non-Muslim targets in retaliation for a non-Muslim insulting Prophet Muhammad, though there are many books derogatory toward Islam’s prophet that were written in the era of Islam’s great empires. Muslims under Turkey’s Ottomans, for example, did not attack non-Muslim envoys (the medieval equivalent of today’s embassies) or churches upon hearing of real or rumored European sacrilege against their religion.

Clearly, then, violent responses to perceived injury are not integral to Islam. A religion is what its followers make it, and Muslims opting for violence have chosen to paint their faith as one that is prone to anger. Frustration with their inability to succeed in the competition between nations also has led some Muslims to seek symbolic victories.

Yet the momentary triumph of burning another country’s flag or setting on fire a Western business or embassy building is a poor but widespread substitute for global success that eludes the modern world’s 1.5 billion Muslims. Violent protest represents the lower rung of the ladder of rage; terrorism is its higher form.

Islamists almost by definition have a vested interest in continuously fanning the flames of Muslim victimhood. For Islamists, wrath against the West is the basis for their claim to the support of Muslim masses, taking attention away from societal political and economic failures. For example, the 57 member states of the Organization of Islamic Conference account for one-fifth of the world’s population but their combined gross domestic product is less than 7% of global output—a harsh reality for which Islamists offer no solution.

Even after recent developments that were labeled the Arab Spring, few Muslim-majority countries either fulfill—or look likely to—the criteria for freedom set by the independent group Freedom House. Mainstream discourse among Muslims blames everyone but themselves for this situation. The image of an ascendant West belittling Islam with the view to eliminate it serves as a convenient explanation for Muslim weakness.

Once the Muslim world embraces freedom of expression, it will be able to recognize the value of that freedom even for those who offend Muslim sensibilities. More important: Only in a free democratic environment will the world’s Muslims be able to debate the causes of their powerlessness, which stirs in them greater anger than any specific action on the part of Islam’s Western detractors.

Until then, the U.S. would do well to remember Osama bin Laden’s comment not long after the Sept. 11 attacks: “When people see a strong horse and a weak horse, by nature they will like the strong horse.” America should do nothing that enables Islamists to portray the nation as the weak horse.

Mr. Haqqani is professor of international relations at Boston University and senior fellow at the Hudson Institute. He served as Pakistan’s ambassador to the U.S. in 2008-11.

A version of this article appeared September 14, 2012, on page A13 in the U.S. edition of The Wall Street Journal, with the headline: Manipulated Outrage and Misplaced Fury.